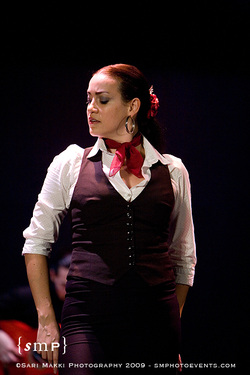 Mercedes Ibarra discovered Flamenco in 1995 at UCLA when choosing a dance class on a whim. She had studied other forms of dance throughout her childhood and was looking for any dance class to squeeze into her college schedule. She fell in love with Flamenco during the very first class and her teacher, Liliana de Leon-Torsiello, described her as a natural and asked her to join her company, DeLiRitmo, within a year. After her years at UCLA, she became a member of the Gabriela Garza Flamenco Dance Company, performing at several venues in Los Angeles and Orange County, California.

In 2005, she and her husband, Tarik, moved to Spain where she studied at the world-renowned Centro de Arte Flamenco y Danza Española, Amor de Dios, in Madrid. While she was there, she studied with Flamenco masters such as, La Truco, David Paniagua, Inmaculada Ortega, Marta Jimenez and Manuel Reyes Maya, the latter being her primary influence during that time. While in Madrid, Mercedes also performed at the tablao, El Juglar in the historic Flamenco district of Lavapiés.

Mercedes and Tarik returned to Los Angeles in the Fall of 2008. Right away she began working as a performer at various Flamenco venues throughout Los Angeles and Southern California.  She also kept training, collaborating, and performing with several local master artists such as Roberto Amaral, Briseyda Zarate, Angelita Agujetas, Claudia de la Cruz, and Linda "La Matadora" Andrade. In 2010, a personal dream came true when she got to study with the legendary Manuela Carrasco at the Albuquerque Flamenco Festival. Mercedes has also been asked to collaborate multiple times with artists and companies of other forms of dance, including Heidi Duckler Dance Theatre.

She joined Linda Andrade's company Sakai Flamenco, as a featured dancer in 2011.  When Linda decided to retire from Sakai in 2019,  she asked Mercedes to take over as the company's Artistic Director.  Sakai works in collaboration with the Los Angeles Music Center to bring Flamenco performances to Los Angeles area schools and to the community.  In 2016, Mercedes joined the faculty of the Ballet Folklorico Conservatory at the prestigious Orange County School of the Arts as the Flamenco Dance Teacher.  Finally, as the Artistic Director of Sakai Flamenco, Mercedes was also hired as a Teaching Artist for the Los Angeles Music Center, Los Angeles Arts Organization, and College of the Canyons.  She has been a member of the International Dance Council at UNESCO since 2014.

Audience members and peers alike have described Mercedes as possessing deep musicality, elegant arms and detailed hand technique, aire, and an infectious joy for dancing. Mercedes  is often introduced as a dancer that embodies the true intensity of Flamenco, primarily due to her expressiveness and powerful stage presence. Students describe Mercedes as a giving, loving, and patient teacher, who is passionate about sharing her art form and equally passionate about student learning.